Origins and theory of Dalton education 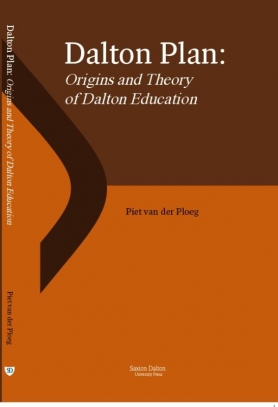 Dr. Piet van der Ploeg lectures Philosophy of Education at the University of Groningen in the Netherlands. His research interests include the history of reform education and the philosophy of citizenship education.

Apart from John Dewey, no American educational reformer has been as
internationally successful and influential as Helen Parkhurst, the founder of
Dalton education. In the 1920s and 1930s, Dalton education was spread throughout the world. At the moment the Netherlands is the country with the highest density of Dalton schools. Almost four hundred elementary schools (five percent of all) are Dalton schools.
This historical and theoretical study gives an account of the practice and the
theory of the Dalton Plan. Next it discusses the background and context of
the Dalton Plan. It also compares the Dalton Plan to other critical and
innovative approaches to education.
Helen Parkhurst was herself not keen on historical and theoretical exercises.
This study shows that historical and theoretical research is interesting
nonetheless. It demonstrates the distinctiveness of Dalton education, for
instance: *that learning by experience is not the same as learning by doing
and that experience doesn't have the same role for Parkhurst as it does for
other reformers; *that there are important differences between working with
assignments in the Dalton Plan and working with materials in the Montessori Method; *that the Dalton Plan holds efficiency as its main objective, whilst at the same time opposing the efficiency-hype seen at the beginning of the twentieth century; *that the meaning of cooperation in the Dalton Plan is not the same as what we usually mean by this; *that Parkhurst's school as a community distinguishes itself from Dewey's school as a community; and *that freedom in the Dalton Plan is something other than freedom of choice.